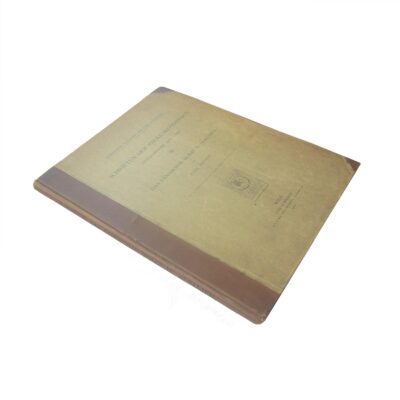 Particularly rare, comprehensive and richly illustrated account on a journey through today’s Southern Albania, focussing on the regions around the cities of Berat and Vlora.

The author, Austrian Albanologist, Slavist, archaeologist and historian Carl Ludwig Patsch (1865-1945), at this time head of the Museum of Bosnia and Hercegovina in Sarajevo and later founder of the Albanian National Museum in Tirana (in 1922), started his journey in spring 1900 from Vlora, then travelled south-east to the Griva Mountains and back along the coast to the laguna of Vivar, afterwards again in direction south to the Akrokeraun mountains, and finally towards east and north to Mallakastër area (with an entire chapter about the Myzeqe plain), finishing his route in the city of Berat.

Patsch documented many of his findings on site during April and May 1900, e.g. by numerous drawings of pottery as well as other decorative objects of art and everyday life, coins, peasant’s tools, buildings (farm houses, inns (turkish »han«), monasteries and residences of nobles), antique archeological sites (mainly ancient greek) and stone inscriptions (the one in Byllis depicted with a double-paged illustration), and most remarkably by a number of photographies of landscapes and people (clergymen, Muslim and Christian men, women and children in their custom habit, peasants, shepherds and traders, and also from people belonging to non-albanien ethnic groups (e.g. Gypsies, Aromanians). Many of them are reproduced in this volume published by the Austrian Academy of Science. According to the renown Albanologist Robert Elsie most of the objects and sites documented by Patsch do no longer exist today.

Edges, corners and boards with some wear and in parts slightly bumped, paper time-stained, otherwise well preserved copy indeed of this very hard to find item.