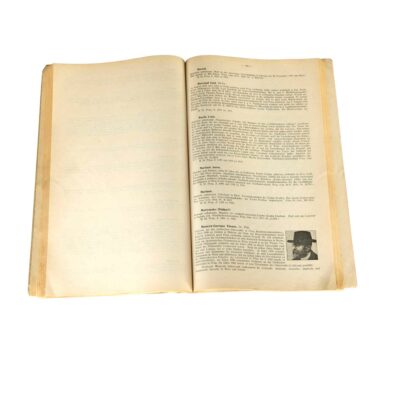 Large 4to (33:24 cm). [2 (fly leaf, introductory text], 198 leaves of text to rectos only. Cliché and offset, bound with two staples in the original grey neutral wrappers.

Confidential directory by the Austrian police listing Czech and other »traitors« during WWI, including James Joyce.

Contents: Comprehensive alphabetical directory by the Austrian police with wanted briefs in German and partly photographs of nearly 1400 persons accused or suspected of engaging in treasonous activities abroad against the Austro-Hungarian government and, in particular, the war effort. The entries sometimes cite letters intercepted or speeches reported by foreign agents. The suspects include mainly Slavic and in particular Czech citizens of the Habsburg empire living abroad – in countries at war with Austria like France, Russia and the U.S. or in neutral states. Among the best known figures are the future president of the first Czechoslovak Republic, Tomáš Garrigue Masaryk, the writer Jaroslav Hašek (then based in Kiev and qualified as „anarchist“), the artist František Kupka (Paris), and the brothers Vojta and Edvard Beneš. Many of the suspects were members of the Czechoslovak Legions in France or Russia.

The directory, functioning as reference, criminal complaint and arrest warrant at the same time, also lists some foreigners who expressed sympathy for the Czech cause, e.g. the Croatian sculptor Ivan Mestrović, or are seen as „politically suspicious“. Interestingly James Joyce (leaf 74 r.) is one of them. Joyce lived in the Habsburg Empire with interruptions between 1904 to 1915, more precisely in Pola on the Istrine peninsula and later in Trieste, where he made his living as an English teacher. Being expelled from Pola by the Austrian authorities like all foreigners during 1905 in course of the discovery of an irredentist Italian espionage ring Joyce moved further to Trieste, where he also established contact to Italian socialists. There he was even arrested once after raising his voice against police officers who wanted to arrest drunken British sailors. Thus not unknown to the Austrian authorities already and being a British citizen Joyce had to leaf Austria for Zurich in June 1915.

In late 1919, Egon Erwin Kisch published an expose on the present album, also known as »Album velezrádců, 1914–1918« [Album of traitors], in the »Prager Tagblatt« daily newspaper, which demonstrated how hastily and often erroneously the Austrian authorities had compiled their wanted list. In many cases, gossip and rumours led to arrests, prison terms, and even a few executions.

Rarity: KVK, OCLC show the copies at the Austrian and Czech National Libraries, Zürich, Tübingen and Oxford; in the U.S. the item is only held at Hoover, Indiana, LOC, and Utah.