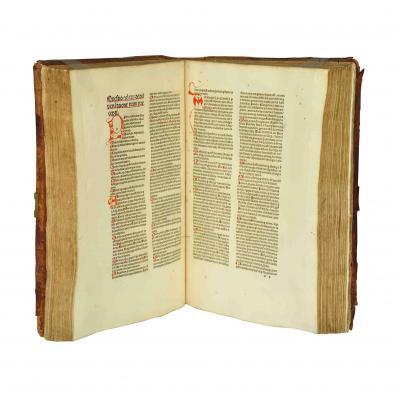 Claiming the supreme power of the Pope

Rare incunabula edition of the »Summa de potestate ecclesiastica« of Augustine of Ancona (ca. 1275–1328), an Augustinian friar, theologian and author, understood as a follower of Thomas Aquinas.

Contents: With this work Augustine supported the supreme power of the pope in both temporal and spiritual affairs and hence interfered in a fervent political issue of his time. He was acclaimed by Pope John XXII in 1326, and the »Summa« was widely distributed in manuscript and later also in numerous printed editions, starting with no less than 5 incunabula.

Present copy printed by Pierre Hongre not later than 1480 in Lyon is continuously rubricated by hand using Lombard initials and paragraph signs in red, whereof many decorated with interlaced ornaments, the initals additionally hightened with albumen. A few initials are not filled out but have initial spaces, mostly with guided-letters. Clean and precise print with gothic letters in two columns of 54 lines each, beautifully typeset with wide margins on strong mould paper.

Binding: Full calf binding on three raised bands made of sheepskin over oak boards. Boards with 6 different contemporary stamps in blind and remainder of embossed brass clasp on front board. Renewed spine from the 17th century with hand-written title and library sign.

Condition: Fragment of metal clasp with blind ornamental and typographic tooling on front cover; boards at edges with faults, pigskin heavily worn and with some faults; binding and all leaves with extensive wormholes throughout; Blank leaf a1 is missing, as in some other copies also (e.g. Cambridge UL); margins of leaves o5, o2, z2-4, z5, D2-D7 and E4-E6 with water stains; a number of leaves slightly finger-stained, and with traces of colour. Early inscriptions with ink on leaves a2r (owner’s remarks), a3v, c8r and d8r.

Provenance: Leaves a2r with 2 owner’s remarks, the earlier from the 16th century stating the library of a Minorites monastery, and another dated 1629.

Holdings, Rarity: ISTC quotes 91 copies worldwide in institutional holdings. No copy was ever auctioned according to Jahrbuch der Bücherpreise (1906-38), Jahrbuch der Auktionspreise (1950ff.) und Auktionspreise online (ca. 1988ff.) Sander however quotes 3 auction results before 1930 in France, the U.S. and the U.K. ABPC online shows no auction result at all for this edition since 1972.