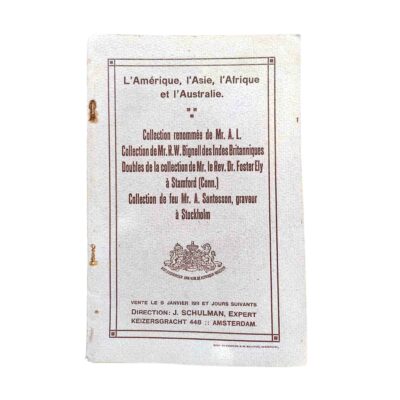 A richly illustrated catalogue of an important world coin auction, 1911

Contents: Present catalogue contains 2,537 numbered lots of coins and other numismatic objects to be auctioned by the Amsterdam based coin auctioneers Schulman in early January 1911. Schulman was founded in 1880 and the firm remains the oldest Dutch coin auctioneer as well one of the world’s most reputable in this field until today. Present corpus of coins for this 100th auction of Schulman’s came from the collections of R. W. Bignell (for British India), Rev. Foster Ely (Stamford, Conn.), the Swedish engraver Axel Santesson and a certain Mr. A. L., as stated on the cover and the title page.

All objects are accurately described in French language, but also in English, as far as they originate from the U.S. Measures, condition and rarity are stated. The coins, indexed first after collection provenance and secondly according to geography and/or the colonial powers that issued them, originate from Africa, the Americas (Argentina, Bolivia, Brazil, Chile, Guatemala, Mexico, Peru, the U.S. [including the former British colonies] and the Caribbean, among others), Asia (India, Indonesia, Japan, the Philippines, Siam and Siberia, among many others) and Australia. Additionally coins from the Greco-Bactrian Kingdom (256 to ca. 100 BC) were also included in the sale.

Illustration: 34 of the lots were photographed for this catalogue and reproduced recto and verso in fine photolithography on 3 post-bound plates of glossy paper.