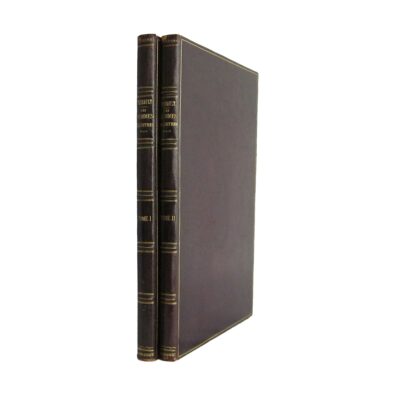 Well preserved copy of the 1st printing of this Who’s Who of 17th century France, edited by Charles Perrault, an influential figure in the 17th-century French literary scene and leader of the „Moderns“ during their quarrel against the „Ancients“.

Contents, Illustration: All personalities are pictured with precise engravings by Gérard Edelinck, Jacques Lubin et al. after drawings and paintings by a number or artists. Starting with the omnipotent Cardinal Richelieu, there are to be found e.g. Colbert, Corneille, Descartes, Molière and Racine, as well as Blaise Pascal. His and D’Arnaulds portraits, due to censorship lacking in later print-runs, are well conserved in this copy of the 1st, as well as the engravings of their substitutes Thomassin and Du Fresne, bound in without the correspondent texts as supplements of vol. 2.