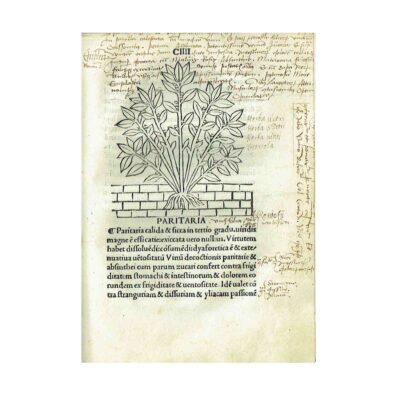 The »Herbarius Latinus«, a most important plant incunabula, with striking Italian woodcuts.

Content: The »Herbarius Latinus« is an anonymous compilation from antiquity as well as Arabic and medieval sources. Present edition is the 2nd Italian one, at the same time the 1st of about a dozen Venetian editions of this most important Renaissance plant book. Present edition was also the first to erroneously ascribe the text to 13th ct. Spanish born physician Arnaldus de Villa Nova, whose name appears run-on with Avicenna’s at the head of the preface, the printer having misunderstood the significance of the names printed beneath a woodcut that supposedly represented these two scholars and that was used as head-piece to the preface in the Vicenza 1491 edition. While the woodcut was omitted from this edition, the names were retained, and the misattribution was perpetuated throughout later editions.

Illustration: The woodcuts were printed from the woodblocks of the 1st Italian edition executed in 1491 by Leon Achates in Vicenza. They seem much more ambitious and naturalistic than those in the earlier German editions (the book was first published in Mainz in 1484), „… being finer in execution and the lines are more delicate…“ (Klebs). „A delightful example, almost Japanese in style, shows an iris at the edge of a stream, from which a graceful bird is drinking. In another picture the fern called ‚capillus veneris‘, which is perhaps intended for the maidenhair, is represented hanging from rocks over water“ (Arber, pp. 192f.).“ As regards content this Italian edition also differs, as it includes plants used as medicine and sold in pharmacies and by spice merchants. – With beautifully calligraphed, partly contemporary annotations and marginalia throughout made with differently coloured ink in various languages (e.g. Hungarian), due to later cutting in parts lost.

Condition: Cover bumped and worn, top and bottom part with faults due to worming, some parts with worm holes, moderately stained and finger-soiled throughout, leafs i2 to i4 loose, some pages with minor faults at margins or traces of old restoration, overall despite 14 leafs missing a substantial copy of this precious incunabula, gorgeously printed with wide margins.

Rarity: ISTC quotes 75 copies worldwide in institutional holdings, of which 17 imperfect like preceded.