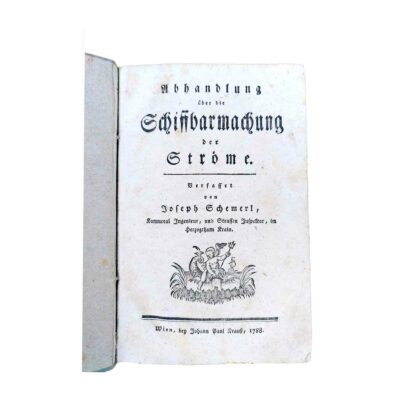 A profusely illustrated and particularly scarce manual on hydraulics, 1788

Only edition of this profusely illustrated and particularly scarce manual on hydraulics by Austrian engineer Joseph Schemerl.

Author, Content, Illustration: After undertaking study trips to the Netherlands and Germany Joseph Schemerl (also Jožef Marija Schemerl, 1754-1844) from his early twenties devoted himself to road building and inland water transportation throughout the Austrian Empire, a dedication that made him to be a leading expert in this field. From 1799 to 1803 he successfully directed the construction of the Wiener Neustadt Canal, for which he was raised to the peerage by the Austrian Emperor. In 1810 Schemerl delivered the first design for regulating the Danube.

Present manual delivers detailed and richly illustrated advise on how to plan and construct locks, canals and bridges, about channel clearing and enlargement, tow paths, subterranean waterways and stream bed remediation. Plate XXII shows a ground plan for the aqueduct along the Oxford Canal in central England.

Rarity: Particularly scarce in trade, JAP/APO and RBH quote only 1 copy at auction in the last 20 years. Not in VD18. Only 3 copies to locate in the U.S. and UK (London [British Library], Harvard, Yale).