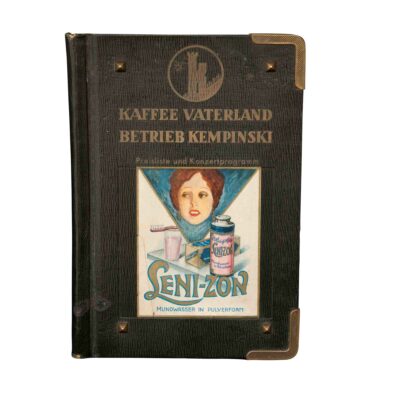 Exclusive Art Deco menu card of the largest café in the world, Berlin, 1928

8vo (22,3:15,5 cm) 72 pages. Multicolour offset (cover illustr.), cliché and letterpress in red and black printing on glossy paper, saddle-stitched in the original paper cover with red pictorial cover design incorporating the company logo, and bound over heavy cardboard in the original calico with leather appearance, protected by embossed brass corners and 8 support buttons (4 each at front and rear cover), as well as gilt embossed title incorporating the company logo.

Elaborately designed and manufactured Art Deco menu card book and concert programme of »Kaffee Vaterland« (Coffeehouse Fatherland), then the largest coffeehouse in the world and one of the hippest cafés of The Golden Twenties in Berlin.

Contents, Illustration: Menu card and concert programme each take up half of the book and are both divided into chapters each separated by a register tab. The menu offers small dishes, a huge assortment of alcoholic beverages as well as cigars. The concert part lists a total of 697 (!) musical pieces (extracts from symphonies, operas and operettas, waltzes, marches etc. by classical and also by modern composers) to be performed by one of the numerous in-house orchestras, bands and singers. The book is illustrated throughout with pictorial adverts.

»Kaffee Vaterland« was situated in the ground floor of the famous »Haus Vaterland« (House Fatherland) at Potsdamer Platz, a huge amusement palace established 1928 in a six-storey building formerly known as »Haus Potsdam«, and equipped with cinemas, ballrooms, bars, cafés, pubs and theme restaurants (each dedicated to different countries, regions or towns and therefore being a forerunner of todays dinner theatres). Modernised by Carl Stahl-Urach, the architect for Fritz Lang’s Doctor Mabuse films, the exterior of the new amusement palace was converted into a striking example of modernist »Licht-Architektur«. A spectacular and popular site the »Haus Vaterland« was frequently alluded to in artistic contexts, e.g. in Irmgard Keun’s novel »Das kunstseidene Mädchen« (1932).

Established by the Kempinski family of renown Berlin restaurateurs and operators of luxury hotels in 1928 it was run by this company until 1933, when the Jewish Kempinskis had to sell their assets for a pittance and flee the Nazis. The building was damaged during WWII and finally demolished in 1976.