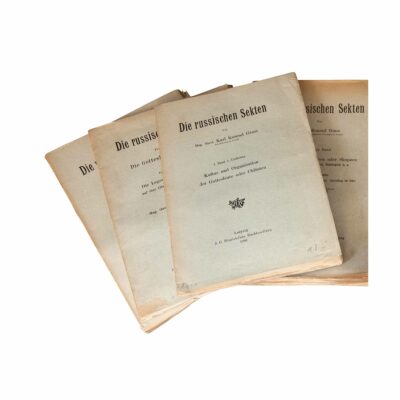 Complete set of this standard work about religious sects of Russian Christianity.

Contents: Vol. 1 of present monumental study by Karl Konrad Grass (1870-1927), a protestant theologian, historian and religious scholar of German origin teaching at Tartu University (Estonia, then part of the Russian Empire) is dedicated to the so-called »God’s People« or the »Khlysts« and related groups, a sect widely known for their asceticism, sexual abstinence and their ecstatic rituals including self-flagellation. Vol. 2 deals with the »White Pigeons« or »Skoptsy« and related communities, best known for practicing castration of men and the mastectomy of women in accordance with their teachings against sexual lust. Both sects are said to have existed in small groups until the 1970s.

Condition: An additional complete set of vol. 1 (an ex-library copy in a private half cloth with the publisher’s original wrapper for vol. 1 bound in) was bought separately to complete this set, as vol. 1, part 4 was originally missing as an instalment in the present set. Margins of wrappers occasionally with tears, spine of vol 2, part 2 at top with little fault, wrappers occasionally worn and time stained, in general solid, almost uncut and therefore unread set.