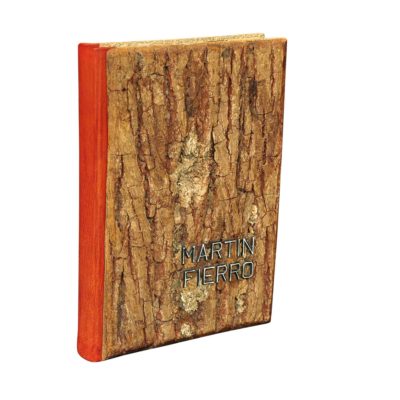 Uniquely bound copy of a profusely illustrated edition of this literary touchstone of Argentine national identity, inscribed by the editor.

Binding: The attractive artist’s binding of this volume executed by a bookbinder named Luis F. Mariotti is presumably unique. This at least is suggested by a calligraphic note left on the 2nd fly leaf recto: „Encuaderno / Luis F. Mariotti / Bs [Buenos] As. [Aires] Argentina / Este Ejemplar / Corteza natural / De Peterebi / 1973“. The skilfull binding captivates particularly through Mariotti’s use of natural Peteribí timber, for he also incorporated the bark, with which he gave the cover a „rural“ note corresponding to the atmosphere of the epic poem Mártin Fierro, situated in the rural Argentina of the 19th century. The title letters, made of synthetic material and coloured white, are tipped-on directly to the front cover. Furthermore Mariotti also used exquisite endpapers, paste paper with a striking composition of brown blots. He even perforated the edges in order to imitate the structure of wood.

Condition: First and last pages minimally finger-stained, else in fine.