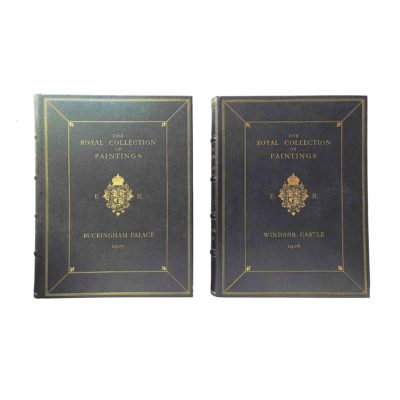 Folio sized, luxurious inventory of 180 paintings in possession of the British Royals, 1905/1906

CUST, Lionel: THE ROYAL COLLECTION OF PAINTINGS AT BUCKINGHAM PALACE AND WINDSOR CASTLE. 2 volumes. 180 photogravures. London and New York:  1905 and 1906.

CUST, Lionel: THE ROYAL COLLECTION OF PAINTINGS AT BUCKINGHAM PALACE AND WINDSOR CASTLE. 2 volumes. 180 photogravures. With an introduction and descriptive text by Lionel Cust. Published by command of His Majesty Kind Edward VII. by the fine arts publishing company. London and New York: Hazell, Watson & Viney for William Heinemann and Charles Scribner’s Sons, 1905 and 1906.

Particularly fine set of this folio sized, luxurious inventory with bright photogravures of 180 paintings in possession of the British Royals.

Contents: Present publication was curated by the art historian Lionel Cust, who was appointed director of the National Portrait Gallery in 1895, and in 1901 was appointed Surveyor of the King’s Pictures, a position which he held until 1927. The selection of paintings was made by Cust „under the direction of Lord Chamberlain“ and „in order to show the importance and extent of the collection of paintings at present in His Majesty’s possession“ (introduction). It covers works by English, Dutch, Flemish, Italian, German, French and Spanish painters from the 15th to the 19th century.

Condition: First leafs of both volumes with light foxing, otherwise very well preserved set, covers very fine indeed thanks to the protection provided by the boxes.

Rarity: RBH quotes 4 sets at auction, none of them complete with the original clamshell boxes and therefore comparably fine covers like the present.