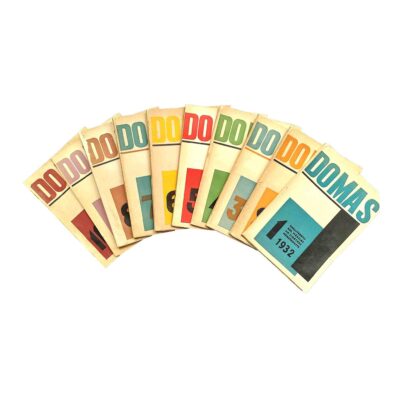 Complete set of the 9th year of »Domas«, a particularly important, rare and in parts illustrated Latvian magazine for literature, the arts, politics and science, containing contributions mostly by protagonists of the aesthetically modernist and politically socialist Latvian cultural scene.

Contents: »Domas«, a journal „sophisticated in tone and appearance“ (Fraser) was published between 1924 and 1934 in 10 issues each year (year 8 (1931) in 12 issues; year 11 (1934) in 4). Among many others contributors were Latvian avant-garde poets Aleksandrs Čaks, Kārlis Dziļleja and Pavlis Vilips, as well as political essayist Adolfs Talcis. In addition translations of texts by Henry Barbusse, Panait Istrati and Sergei Tretiakov are also contained.

Illustration: Like for all other issues of this year Kārlis Bušs created a multicolour constructivist cover design composing bold typography and geometrical elements in a striking montage. Bušs was student at the art class of the Riga people’s College (RTA), a centre for progressive artists of those days lead by Sigismunds Vidbergs and Romans Suta. „For a brief period at the end of its publication (1931/1932), »Domas« covers were typographically bold with late-constructivist imagery in flat colour, exhibiting a diffuse tie to contemporary European vanguard design movements.“ (Fraser) The bright cover colours and their unconventional combinations chosen by Bušs were turquoise and black (no. 1), orange and dark blue (no. 2), light blue, orange and brown (no. 3 and 7 ), green and black (no. 4), red and black (the classics of left-wing vanguard, no. 5), yellow and black (no. 6), brown and black (no. 8), lilac and black (no. 9) and ruby red and black (no. 10). Furthermore »Domas« contains numerous expressionist lino-cuts by Adja Junkerss (or Adja Yunkers, 1900-83), who after 1945 became an important abstract painter in the US.

Condition: Issues no. 2, 6, 7 and 8 with skilfully renewed spine, issues no. 4 and 9 with small faults at corners of rear cover (not afflicting the printing), issue no. 10 with skilfully renewed rear cover, some other issues with little repair at margins, in parts slightly foxy and finger-stained as well as marginally water-stained, paper time-stained, otherwise well preserved set with partly uncut copies.

Rarity: Complete sets of this magazines are very hard to find indeed. According to WorldCat and KVK only the Latvian National Library in Riga and the BSB hold complete sets of the year 1932. Additionally Stabi BSB, IISG, NYPL, StaBi and the Herder-Institut (Lahn) have holdings of single copies or runs of several copies of different years.