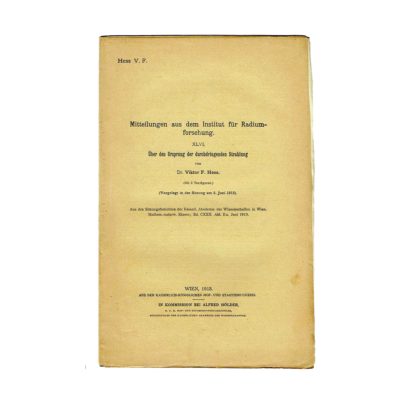 First offprint of a milestone paper on cosmic radiology, 1913

Scarce first offprint in original wrappers of this groundbreaking paper on cosmic radiology by Austrian-American physicist and Nobel laureate Viktor F. Hess, along with a lot consisting of 21 further early offprints of the pioneering Vienna Institute for Radium Research, 1911-1919.

Author: Viktor F. Hess (1883-1964) was a founding member of the famous Vienna Institute for Radium Research (Institut für Radiumforschung), the first of it’s kind in the world, and it’s active scientific collaborator from 1910 until 1920. In order to escape Nazi persecution he and his Jewish wife emigrated to the U.S. in 1938, where he continued his academic career.

Contents: In the early studies of radioactivity, it was found impossible to exclude all background radiation from apparatus, even when it was enclosed in lead boxes. It seemed that there must be somewhere a powerful extraneous source of radiation. To see whether this source was in the earth, somewhat inconclusive experiments were performed at various heights above sea-level; they showed that some at least of the rays were extraterrestrial in origin. Hess took up the investigation, and made a series of balloon ascents in 1911 and 1912, measuring the ionization produced in hermetically sealed vessels at different attitudes. He found that the intensity fell to a minimum at about 1.000 metres, and then increased again until at about 5.000 metres, where it was twice as powerful as on the surface of the earth. Hess than made one ascent during the nearly total solar eclipse on 12th April 1912, and he found no difference in the intensity of radiation; this showed that the rays did not come form the Sun, but must have their origin in outer space. Later studies by Compton indicated that their source is outside our galaxy. Based on his discoveries first written down in present paper Hess was awarded the Nobel prize in 1936 „for his discovery of cosmic radiation“.

Condition: Front wrapper of the core paper slightly finger stained, otherwise well preserved copy indeed, uncut though obviously not opened at all. Some of the other issues in parts minimally torn at margins and with some shelf wear, some covers with little staining, spine of issue no. III loose, issue no. XXV with small fault at upper left corner, paper of all issues slightly time-stained, otherwise well persevered as in most cases uncut and not opened.

Rarity: All offprints particularly rare in trade, where only nos. 90 and 92 of the present lot are available at the moment. For Hess‘ important paper on the discovery of cosmic rays RBH as well as JAP/APO show no auction results at all.