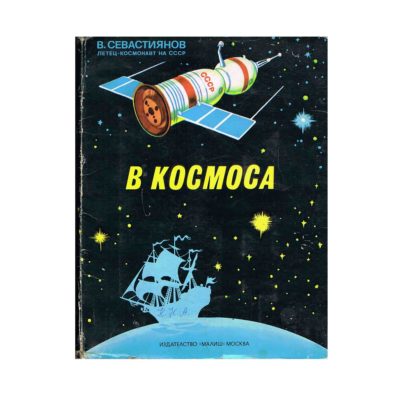 SEVASTYANOV, Vitali Ivanovich; BESLIK, A.: V kosmosa [Into Space]. Translated into Bulgarian by Bozhana Georgieva. Engineered and with colour illustration on cover and 9 double paged sceneries of butterfly-folded cardboard, including 3-dimensional stand-up figures, horizontal and vertical pull-tabs and other moveable figures by A. Beslik. Moscow: Edition »Malish« 1979.

1st Bulgarian edition of this magnificient Russian pop-up book about history, present and planned future of the Soviet space program explained for young readers and viewers.

Contents, Illustration: Accompanying texts by Vitali Sevastyanov, a former Kosmonaut, paper engineer A. Beslik meticulously constructs and profusely illustrates sceneries with surprising 3-dimensional stand-up figures, pull-tabs and other movable items presenting in detail Gagarin’s historical first journey outer space in 1961 (from the preparations before countdown until the landing of his capsule Vostok I back on earth), furthermore the first journey of lunar rover Lunkhod 1 on the moon in 1970, the joint U.S.-Soviet »Apollo-Soyuz Test Project« in 1975, as well as insights in the Soyuz spacecraft and at the end a projected Soviet space liner for public transport.

Condition: Front side of cover with former owner’s remark, cover generally worn and with creases, especially at spine, top and bottom of spine with some stronger wear, in total a collectable copy of this masterpiece of paper engineering with all moveable parts complete, though sometimes worn and creased at touching and breaking points.