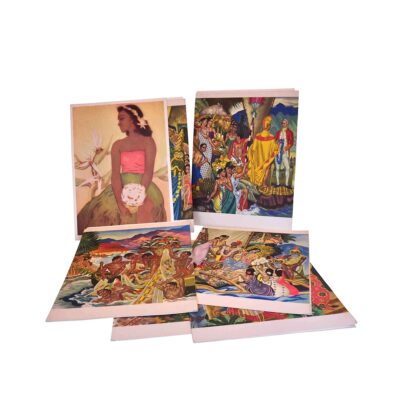 Eugene SAVAGE; John KELLY: 13 multicolour halftone illustrated menu cards, where of 6 with reproductions of murals by Eugene Savage and 7 with etchings or aquatints by John Kelly. [1948]-1952.

Outstanding set with a total of 13 menu cards illustrated with multicolour halftone covers related to Hawaiian history, art and tourism around 1950.

The cover illustrations of 6 cards, all printed on white matt cardboard stock, show multicolour halftone reproductions of the entire series of 6 huge Art Deco oil paintings (2,40:1:20 m), originally made by Eugene Francis Savage in 1940 for the Matson Navigation Company and titled „A God Appears“, „Pomp & Circumstance“, „Island Feast“, „Aloha – Universal Word“, „Festival of the Sea“ and „Hawaii’s Decisive Hour“. Meant as murals for the ships the paintings were never used, as the Company’s fleet was drafted for the war effort. It was not until 2014/15 when the originals were on public view for the first time at the Honolulu Museum of Art on the occasion of the exhibition »Art Deco Hawai‘i«. In 1948, however, preceded multicolour menu covers based on the canvases made their appearance on the company’s flagship »SS Lurline«, cruising between San Francisco and Los Angeles and Hawaii until the early 1960s. Eugene Savage’s splendid cover design, which incorporates front and rear cover alike, was bestowed the Certificate of Excellence at the 1950 Printing for Commerce Exhibit of the American Institute of Graphic Arts. Our set is blank, i.e. on the inner left sides of the menu cars an explanatory text titled „A word about the subject of the cover painting“ is printed, whereas the inner right side, usually containing the dinner menu itself, is plain.

The other 7 cards are dinner menus of the Waikiki based »Royal Hawaiian Hotel«, the most traditional, renown luxury hotel of Hawaii, also named „The Pink Palace of the Pacific“. The menus, all printed on white glossy cardboard stock, have front covers with multicolour halftone reproductions of etchings or aquatints by John Melville Kelly, titled „Big Surf at Waikiki“, „Lei Maker“, „Hawaiian Night“, „Hula Danger“, „Breau Fruit“, „Fisher Man“ and „Healani“. Melville is best known for his ravishing depictions of Polynesians. Each of the menus, dating from Sept. 13th until Sept. 26th 1952, shows information about the entertainment program for the respective evening (music, dancing, bingo) printed on the inner left side, and the dinner menu itself on the right side (e.g. „Aiguillette of Mahimahi Saute au Beurre, Epicurienne, Straw Potatoes“).